LIVE 2013 will start with a bang, featuring three speakers with deep roots in the history of live programming. Steve Tanimoto will be revisiting his framework on "liveness" and thoughts on new levels and directions.
David Ungar and Randy Smith will be jointly talking about the hugely inspirational systems ARK and Self.
Thor Magnusson will be speaking about the history of the live coding music scene and his newest live coding system.

Liveness in programming environments generally refers to the ability to modify a running program. It can be considered as a form of a more general class of behaviors that are various forms of information to programmers about what they are constructing. This paper gives a brief historical perspective on liveness and proposes an extension of a hierarchy given in 1990, to now account for even more powerful execution-oriented tools for programmers. In addition, while liveness concerns the timeliness of execution feedback, considering a broader array of forms of feedback is helpful both in better understanding liveness and in designing ever more powerful development tools.

Full paper will be posted after conference.

David Ungar and Randall Smith Reflect on Self

We were delighted to see a workshop dedicated to Live Programming, as we have been fortunate to have been programming in live environments since 1969, and building them since 1985. Since those early days, many have created environments that rapidly respond to what people do, a tremendous benefit. Systems do indeed feel live when they react on their own to stay a consistent part of the world. We propose here a broader definition of liveness, one that emerges from the design principle of making everything seem real. (After all, reality itself is live.) In any such system, the user must always see the true state of the actual thing, and so the reactive character of liveness emerges naturally. But a deeper feeling of liveness emerges when the user is immersed in an entire world that maintains a consistent physics, when the thing on the screen is supposed to be the actual thing.

Thor Magnusson on Live Coding and the Threnoscope 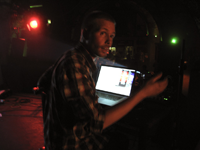 This year is the tenth anniversary of organized live coding in the arts (see www.toplap.org). Diverse live coding systems, festivals, club nights, conference tracks, journal issues, and research projects have appeared in the last decade that have made this form of practice well known within the fields of art, music and science (in particular computer science). With its foundation in musical performance, live coding has now become common in visual arts, light systems, robotics, dance, poetry, and other art forms that can operate with algorithmic instructions. This paper introduces a new direction in the field of artistic live coding where musical works are presented as pieces in the form of a live coding system. The system itself and the code affordances become equivalent to score system in an open musical work for strong improvisation.